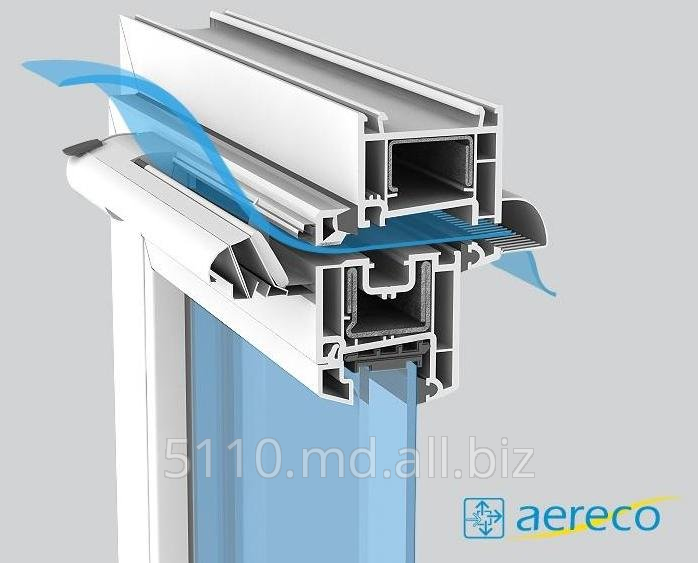 Stitched devices are responsible for providing an air flow to rooms.

Tightly the locked plastic windows increase in air of apartments concentration of dust, products of burning and work of household appliances, for example, of radon. In rooms with insufficient ventilation the special microclimate which is characterized by the increased humidity and temperature is formed. Such environment is favorable for development of a mold, fungi and various microbes.
For normal circulation of clean air and a favorable microclimate, at plastic windows it is necessary to use forced ventilation valves which provide inflow of fresh air from the street, regulate humidity of air and restore a necessary healthy microclimate in the apartment.

The principle of self-regulation is based on the physical law - at increase in humidity matter is extended, at reduction is narrowed. According to this law eight polyamide strips put the gate in action, regulating an air stream depending on the level of relative humidity indoors. The more humidity level indoors, the more is slightly opened the gate and the bigger volume of air comes to the room.
Window stitched devices are mounted in the top part of a window and provide a consumption of air from 5 to 50 m3/h at 10 Pas
Attention! Any pritochny ventilating valve at a temperature from - 10C can become covered to a greater or lesser extent by frost (because of the physical processes described here).
At Aereco valves the probability of frosting is lower than at Air-Box as the air passing through it is directed not vertically up, in a junction of a frame and a slope where the zone with the lowered air temperature is formed, and at an angle to a window, in a ceiling where warm air gathers (the truth if your slopes 35 cm are wider the current of air all the same is sent to a slope, but also in this case the probability of frosting is lower).
Minimum possible width of a shutter for the EMM system makes 410 mm.
* Rama of a window (from above) has to go beyond a quarter of not less than 25 mm (EMM).
* It is necessary to consider that thickness of the valve (EMM) 40 of mm and it can rest against a slope that will reduce the angle of possible opening of a window.