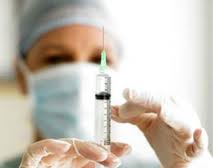 Vaccine against VGBK of rabbits inactivated

The instruction for application of the Vaccine against VGBK of rabbits

The STRUCTURE AND FORM of RELEASE the Fabric inactivated gidrookisyalyumilevy vaccine against a viral hemorrhagic illness of rabbits represents suspension colourless or light pink color with the gray friable deposit which is formed at the bottom of a bottle at storage which easily breaks when stirring in a homogeneous suspension. The vaccine is let out in a look, ready to application, on 20, 40, 100 or 400 immunizirovanny doses packaged in bottles with a capacity of 10, 20, 50, 100 or 200 cm3. On each bottle there has to be a label with the indication of the name of a vaccine, manufacturer and its trademark, quantity of doses in a bottle, numbers of a series and control, date of production, an expiration date, storage conditions, "Before the use to shake up designations of the presents by TU and a precautionary inscription! ". At small packaging of a vaccine (10, 20 cm3) on labels specify manufacturer or its trademark, the name of a vaccine, number of a series, quantity of doses and an expiration date. At violation of integrity of a bottle, lack of a label, change of color of nadosadochny liquid of a vaccine, availability in it of foreign impurity, a mold the vaccine is rejected. It is forbidden to apply a preparation the expired or stored discarded bottles neutralize boiling within 15 minutes.

DOSES AND METHOD OF APPLICATION apply the Vaccine to preventive immunization of rabbits against a viral hemorrhagic illness of rabbits. Rabbits are immunized from 1,5-month age. Immunity steps on third day and not less than 12 months remain. In unsuccessful points impart only clinically healthy rabbits who are in rooms in which there were no cases or death from a viral hemorrhagic illness. In case of vaccination of the animals who are in the incubatory period of an illness the case within the first four days is possible. The vaccine is entered to rabbits intramuscularly once of 0,5 cm3 into the area of an average third of a hip. Before vaccination the syringe and needles will sterilize boiling within 15-20 minutes. The place of introduction of a vaccine is disinfected 70% alcohol. Each rabbit impart a separate needle. At the imparted animals loss of appetite within 1-2 days after an inoculation is allowed. Farms where vaccination of rabbits against myxomatosis is carried out, apply a vaccine against a viral hemorrhagic illness of rabbits not later than 10 days to or not earlier than in 14 days after vaccination of animals against myxomatosis. Repeatedly rabbits each 9 months impart.

STORAGE CONDITIONS store the Vaccine in the dry enclosed space at a temperature of 2-8 °C. The term of its validity - 24 months from the date of its production. Freezing of a preparation is not allowed.

Contact the seller
Vaccine against VGBK of rabbits inactivated

We recommend to see
Vaccines for animals
To Compare the Products
×