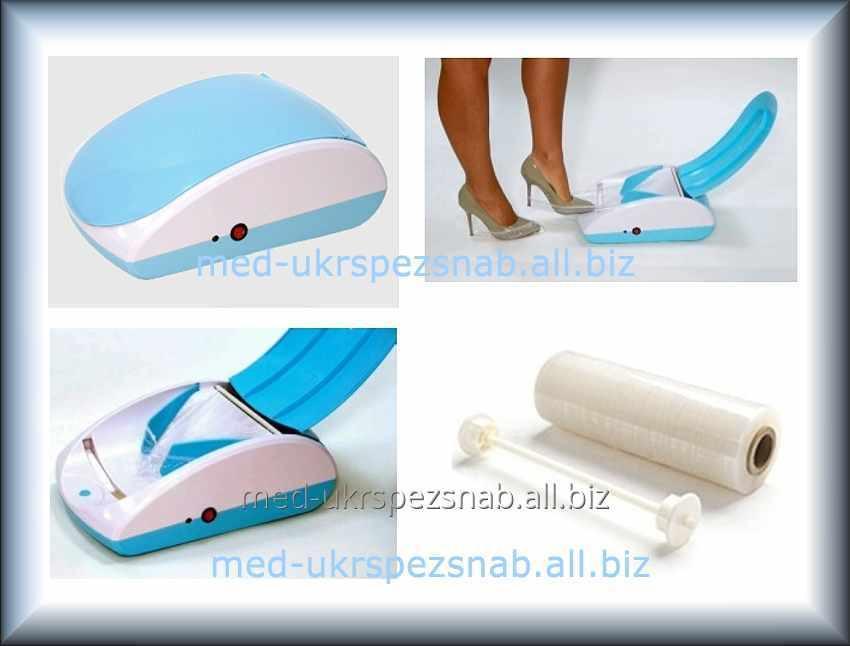 The device ultra-compact for putting on of boot covers of CLEAN STEP
The automatic machine for putting on of boot covers on the basis of a thermoshrinkable film uses new technology. This technology allows to form boot covers directly on a leg, pulling together it to any size, i.e. boot covers ideally fit footwear.
Thanks to in the automatic machine of new type of expendables ― a roller with a film, it became more convenient to fill it. It allows to save time.
The thermoshrinkable film has the big durability and wear resistance. The roll takes not enough place, and its installation happens for several seconds.
After charging, the device for putting on of boot covers of Clean Step can be used 450 times and be supported in a waiting mode from 1 year to 1,5 years. It easy and convenient. It is the new product urged to solve a problem of change of footwear or putting on of boot covers by hands when people come into the room with a clean floor.
In it the condensed film of high elasticity is used. Its good elasticity allows to shroud densely footwear and a sole that a floor remained pure and dry. Advantages of a film: environment protection, high elasticity, wear resistance, strong anti-permeability. It is effective and possesses high quality to avoid frequent gaps. It is easy to establish it in a dispenser, it is the best choice for cleaning and antistatic scopes of application. Clean Step is widely used in life, at factories, in hospitals, harvest shops, showrooms, hotels, laboratories, computer halls, the museums, places where remove footwear or its cleaning is necessary.
Principle of operation of the machine: lets out and cuts off a film, as well as at plastic packing in the closing car. The divider of boot covers instantly heats up for 1,2 sec. to temperature of 80 degrees Celsius. It does not heat up when it is not used, energy saving and safe for environment.
The roll of a film can be used about 600 times (the exact quantity of the made boot covers depends on the sizes of footwear of users), it is not necessary to change a film often. Thickness of our film is twice more, than usual. Wear resistance is more improved in comparison with a usual film. In a usage time you pull so much film how many not obkhodimo on length of your leg.
As a result boot covers turn out well fitting, convenient, beautiful and decent.
The footwear size is not limited.
Does not demand connection to the power supply network.
Spends a film according to footwear length.
Characteristics:
Weight is 4 kg
Time of gymnastics of 2 h
Capacity is 600 boot covers
ABS case of plasticity
Supply voltage Lithium DC12V battery
Period of operation from the accumulator in a waiting mode 1-1.5 years
Productivity creation of 450 boot covers
The size is 35 x 23 x 13 cm
Color is white, blue
Weight 4.00kg
Sizes (D x Sh x V) 35.00sm x 23.00sm x 13.00sm