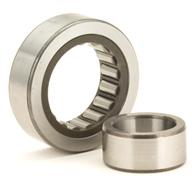 Rolling bearings consist of two rings, balls (different form) and separator (some types of bearings can be without separator), the separating ball from each other holding equally spaced and directing their movement. On outer surface of internal ring and inner surface of outside ring (on end surfaces of rings of thrust bearings of swing) carry out trenches — swing paths on which during the operation of the bearing balls slide.

In some nodes of machines for the purpose of reduction of dimensions, and also increases of accuracy and rigidity apply the so-called combined support: swing paths at the same time carry out directly on shaft or on surface of case shaped part.