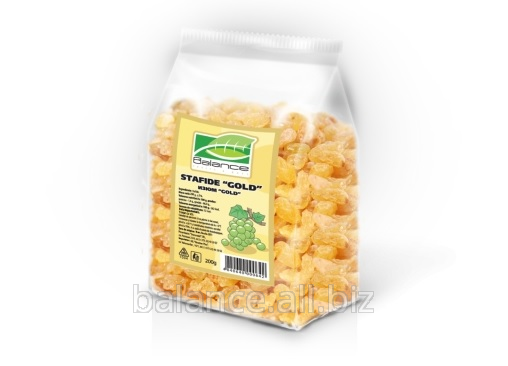 The raisin in essence is the dried-up grapes berries. This tasty and nutritious product is very popular on Blizhnemi the Middle East, and also in the Mediterranean. Except excellent taste, the raisin possesses still very many useful properties.

Traditional suppliers of raisin are Iran and Uzbekistan which are considered as the homeland of this sukhofrukt. Also the raisin is made and transport Tajikistan, the countries of the Middle East, Afghanistan and the American state of California. Allocate several types of raisin which is allocated on ways of its processing and drying: sultana grape - the lightest and small raisin by the size received from light grades of grapes without stone; raisin of light-olive color, the average size with one or two stones; the fleshiest and big by the size, can have several stones. Most often in cookery the raisin is used for a stuffing of confectionery.

The raisin is since ancient times known for the useful and curative properties. In old centuries its ability to strengthen nervous system and to influence positively an organism was noticed. Dried grapes also are useful to heart and lungs. Doctors recommend to use raisin at ischemia, the general weakness, fever, violations of a digestive tract and diseases of kidneys.

The company Neutron Plus, SRL sells the products only across Moldova!
Contact the seller
Raisin of "Gold