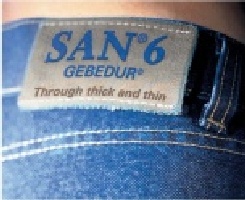 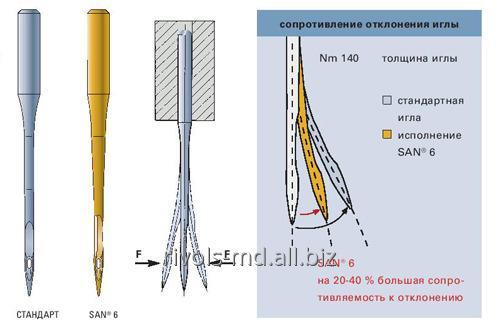 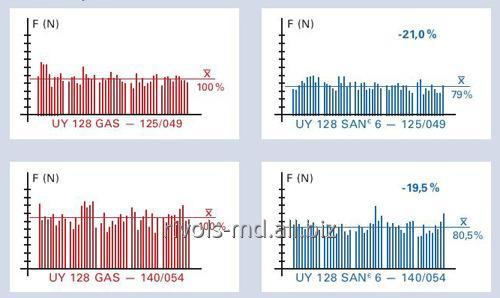 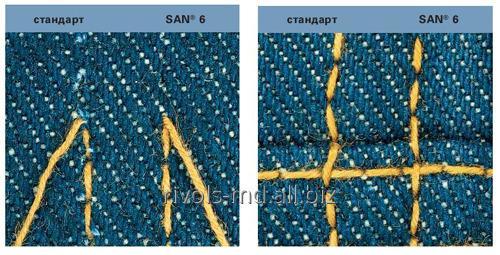 Needles of a special purpose of Groz-Beckert SAN6

Needles of a special purpose Groz-Beckert SAN6 are developed for application in production of jeans clothes. High efficiency in combination with the sparing treatment of fabric is characteristic of them.

Responses from practice confirm progress of SAN6 GEBEDUR. Especially successfully these needles for industrial sewing machines take root by production of jeans, preventing breakage of a needle, the admission is stitch also a rupture of thread.

Stability of needles for the industrial sewing machines Groz-Beckert SAN6

The needle for the industrial sewing machine, the stronger it a deviation in processing of products from heavy materials (for example is weaker, when tailoring jeans). To resist to this phenomenon, the sewing enterprises impose escalating requirements to stability of a needle.

The side bevel on a working part of a needle protects a nose of a petlitel of the sewing machine from damages.

The conic core and new cross section of a groove of a core give to needles for SAN6 denim higher resilience on a bend, 20-40% more, in comparison with a standard needle.

The increased thickness of walls of a cross profile of an edge and conic profile significantly reduce probability of emergence of such problems as breakage of a needle, the passed stitches and a rupture of thread. At the same time the petlitel of the industrial sewing machine is protected from damage.

The improved formation of a loop

Distribution of force at the time of a puncture

Consecutive development led to cores of a special form and to further improvement of a needle for the industrial sewing machines Groz-Beckert SAN6.

Reduction of cross section in the field of an ear of a needle of a special purpose became the following step in improvement of force of a puncture of a needle to material.

Features of RG of an edge

It not only simplifies process of a puncture of fabric, but also increases needle edge service life.

Because of contact with firmer petlitel, sensitive and R edge are quickly damaged after the short term of sewing.

Thanks to the thin rounded-off end and a special form of an edge of a needle which has a bevel to the back party of a petlitel of RG the edge has longer service life without damages.

Besides, needles for heavy and Groz-Beckert SAN6 denim show the following advantages:

As a result we receive:

Problems most often arising by production of jeans clothes

High efficiency in combination with the sparing treatment of material is characteristic of needles of SAN6 GEBEDUR. As a result of development of this needle for heavy fabrics, the probability of emergence of the listed problems significantly decreased.