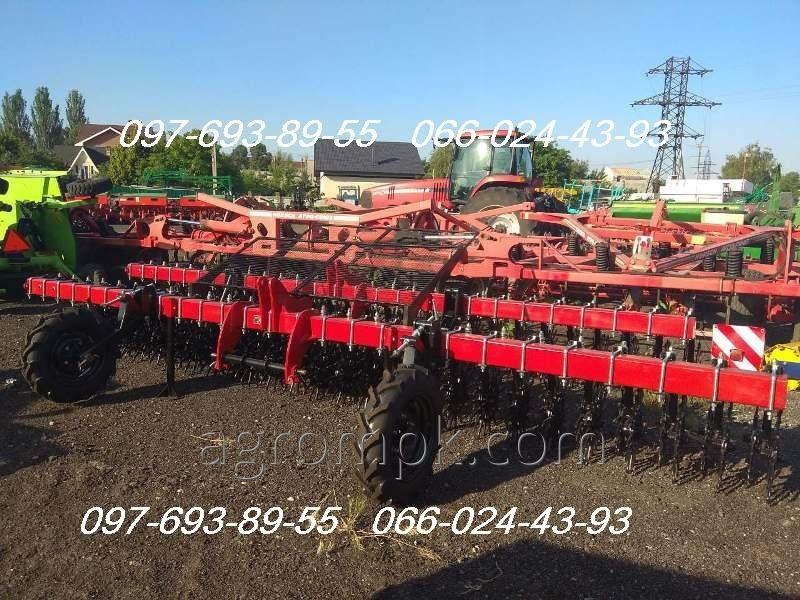 Working bodies of a mattock create an ideal background for initial development of root system of plants, well mulch the top layer of earth, destroying a soil crust, thereby, keeping moisture, destroy threadlike roots of weeds to 100% at speeds up to 20 km/h. It does possible to pass to bezgerbitsidny technology. At emergence of a monolithic soil crust on early shoots of cultural plants, for example, of corn efficiency of use of a mattock sharply increases in a stage of 2-3 leaves when application of zubovy harrows is impossible.

Technical characteristics of a harrow — a mattock rotational: A way of aggregation – hinged,

Working width of capture, m: 6, Depth of processing, the cm, from 3 - regulirtsya by basic wheels.

On crops of winter wheat, in a phase of a spring kushcheniye, experiment regarding accumulation by nitrogen wheat from air in comparison with the site where ammonium nitrate at the rate of 100 kg/hectare was brought was made. Selection of plants on the analysis was made for the 15th day and repeatedly for the 20th day after the first.

Subjected to the analysis all land part of a plant. Definition of nitrogen was carried out by Kyeldol's method.

Results of analyses showed that the content of nitrogen are in plants of winter wheat at one level of security.

On crops of corn with application of a mattock on processing on shoots (a stage "shilets") and in a phase 3-4 leaves, access of air to root system, destruction of weeds of a threadlike form of 100%, and also sprouts of weeds to 27.5% and moisture preservation is provided that in turn favorably affects further development of cultural plants. When processing by harrows of BZSS-1 it is damaged to 10-15%o cultural plants, and when processing by a mattock it is damaged to 0,8%.

On crops of sunflower processing on shoots (two false leaves) and in a phase 2-4 leaves was carried out, the effect was similar to processing on corn shoots. Data of researches on expediency of replacement nitric podkormok were confirmed by spring loosening a mattock, the effect as due to economy of fertilizers, and also costs for their loading, transportation and introduction is gained.