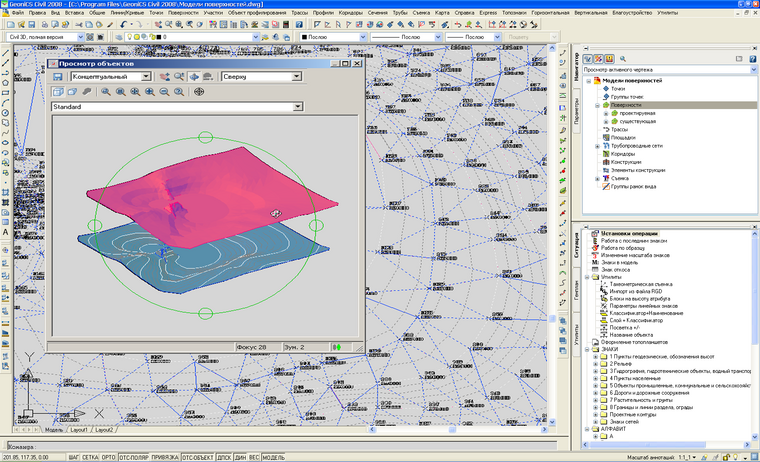 
The Topoplan module is intended for creation of topographical plans, cards and tablets of scale from 1: 500 to 1: 5000. Includes full library of topographical conventional signs (point, linear, band, vulgar), and also means of their drawing, editing and replacement. The Topoplan module is the kernel of the GeoniCS program of Topoplan - Genplan - Seti - Trassy allowing to create topographical plans, to conduct base of points of shooting of the project, to build three - dimensional model of a relief and to carry out the analysis of the received surface. On the basis of the constructed relief model the program allows to solve a number of applied problems.

Operation of the Topoplan module is result the mapped digital models of the district which can be used both in topography, and in GIS, and at design.

It is possible to select three main sources of data on the basis of which in the Topoplan module topographic maps and models of a relief are created:

archive kartmateriala on the firm carrier. These materials are scanned, the received bitmap images are adjusted and inserted into the drawing of DWG in actual prospecting coordinates. The corresponding topoznak are drawn in the mode "how many";

data of field land supervision which can be imported from the RGD file (an exchange format of the program (Research GeoniCS) or from the text file of the sheet of coordinates and marks. The corresponding topoznak are drawn in the mode "how many" or "replacements" if in the GeoniCS program of Research linear objects were coded;

the topological data of different GIS - systems submitting the description of point, linear and vulgar objects which can be imported through the DXF file. The corresponding topoznak are drawn in the replacements mode.

The choice of a necessary topoznak is possible in several ways: via the topographical qualifier, through index, and also through the caused thematic toolbars. Besides, the Topoplan module is supplied with the built - in help regulatory base where information on rules of drawing of topographical signs is collected. Regime of "assistant" which provides to the user of the hint, the concerning drawings of the selected signs is implemented.

Functions of this section are intended for maintaining base of points of shooting of the project and creation of three - dimensional models of a relief or other surfaces, their display and the analysis.

All points of shooting (imported from the file or created at digitization) are included in the database of the GeoniCS project where they can be browsed, edited, integrated in groups; points from base can be inserted into the drawing or to export to the text file.

The three - dimensional model of a relief usually is under construction with use of the primitives received at a stage of creation of a topoplan. Also other sources of information, such as the text files received from the GeoniCS programs of Research and CREDO, and also earlier created drawings of DWG including 3D - the polyline and 3D - edges, horizontals (drawn or received at vectorization by means of programs (RasterDesk and Shotlight), points with a mark on Z, blocks with attributes, etc. can be used.
In addition to points with marks, at creation of model the unlimited number of structural lines (3D - polylines), horizontals (two - dimensional polylines with marks), lines of retaining walls, lines of outline and inner boundaries of model is used; it provides a correctness of the created model. GeoniCS can create and 3D - polylines with arcs. It is possible to check correctness of creation of model by means of its three - dimensional visualization or when viewing sections on any line.

Editing tools and displays of model of a relief give a number of unique opportunities, such, for example, as automatic generation of virtual horizontals at operations of editing model (transfer of edges, change of a mark and movement of a node, an insert and removal of points and edges) and allows to control correctness of the made changes quickly.

Local restructuring of the constructed surface by means of structural lines of different types does a triangulation managed: "conducting" of structural lines on already constructed triangulation is possible that it is very convenient when modeling technogenic elements of a relief; creation of horizontals of different degree of a smoothness, prostanovka on them of texts and berg - strokes.

The Topoplan module is open system: you can independently modify and fill up library of conventional signs, use the relief models created with use of other software (Autodesk Land Desktop, Eagle Point, CREDO, etc. ), to transfer models to external estimated programs.