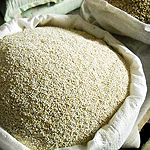 67% of positive reviews from 6
7
7 years on Allbiz
Quickly responds
Technical characteristics
Description
Yachnevy grain - barley grain is known to mankind for a long time. Grain of barley which age is estimated by scientists approximately at 11 thousand years has been found in Jordan.

It is not excluded that barley has been entered into culture in different districts independently. In the Central Europe the culture of barley already in the Middle Ages has become general. Barley could get into Russia from Asia through Siberia or the Caucasus and long since was of great importance as foodstuff for those districts where the culture of other bread is impossible.