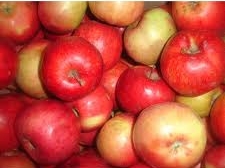 In stock
Reconfirm the price with seller
Ghermes-Agroservice, SA
Moldova, Chişinău
(View map)
+373
Display phones
Call
Products of other enterprises
Description
American grade (Wagner x Johnathan), winter or late winter term of maturing. It is zoned on all South of Russia, in Ukraine. The main zone of commodity production of fruits of a grade in Russia is Krasnodar Krai. Trees rather silnorosly, with spherical krone, a little zagushchenny. The main branches depart from a trunk at an angle in 45 °, slightly rising up in the main part. Bark gray-brown, smooth. Fructification type - mixed. Fruit educations are evenly distributed on all length of branches, stripping is not observed. To sjy on a kolchatka 2-3 fruits remain. In bumper-crop years 2-3-year branches of krone form small dense garlands of fruits.

Escapes of average thickness, more often direct, slabokolenchaty, roundish in section, grayish-brown, poorly trimmed, with the bright slightly extended, slaboshtrikhovaty chechevichka. The sheet plate forms with a stalk a corner about 90 °. Leaf scape thin. Stipules are lanceolate, a little curved. Leaves are oblong, oval or the extended ovoid form, with the pointed or rounded basis and obviously expressed tip, rather equal, sredneslozhenny, in the form of a narrow scoop, sometimes slightly twirled clockwise, with krupnovolnisty dvoyakozubchaty edges, gustoopushenny from below, dark green, slaboglyantsevaty. In nursery a stalk of coevals light brown, densely trimmed, with large chechevichka, leaves of the average sizes, silnoslozhenny, slabomorshchinisty, green, with gray, or even a little bluish shade, with thick or average scapes and large wide stipules. Flowers pinkish, blyudtsevidny, with a short hairless column of pestles, which rylets flush with boots.
Contact the seller
Apple of winter grades